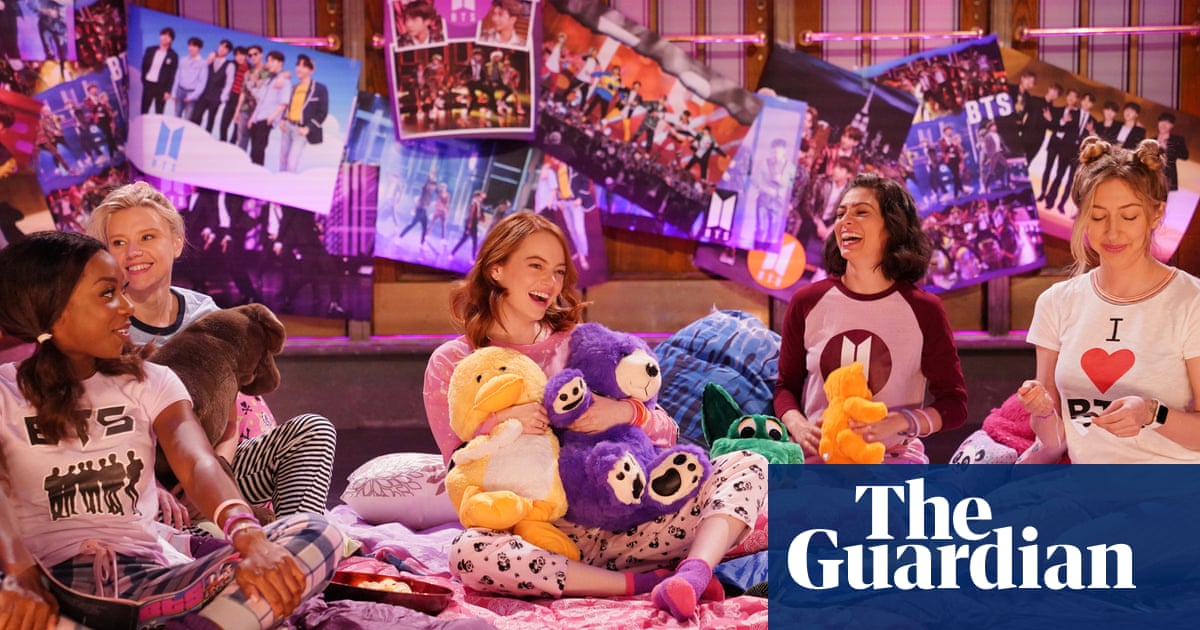 We open on MSNBCs Lockup: Now that the Mueller report turned out to be a big fat zero, were back to prison shows. A trio of hardened criminals share a cell with Aunt Becky herself, Laurie Loughlin (Kate McKinnon), who has acclimated surprisingly well.

Shes joined by celebrity lawyer Michael Avanetti (Pete Davidson); the scourge of the cleaning staff at the Ecuadorian embassy and actual, dactual James Bond supervillain Julian Assange (a bearded and bewigged Michael Keaton); and Takeshi69 (Melissa Villaseor), whos incarcerated for regular stuff like assault. Theres no actual arc to the sketch, but at least its a break from the tired Trump material the cold opens usually center around.

Emma Stone hosts for a fourth time. Even though SNL traditionally rolls out the red carpet for five-timers, she suspects the cast is planning something special. Theyre not. She guilts McKinnon and Keenan Thompson into singing an impromptu song Oh, Emma she hosts! set to the tune of No Woman, No Cry and later they blindfold her while cast members impersonate celebrity guest stars. Eventually, they hand her a denim jacket, the number four lazily spray-painted on the back.

In Dorm Room Posters, Davidson plays a college student stressing out about a history essay. He falls asleep, prompting a dream where the people on his posters a tatted-up white rapper, the characters from a Black Panther-like superhero movie, a model from Maxim Magazines 50 Hottest Girls from Rural Areas and a pro wrestler give him a rundown of the importance of history. Stone goes all the way to 11 with her squeaky-voiced bimbo, but there are long stretches of laugh-free awkwardness.

The cast of The View Whoopi Goldberg (Leslie Jones, spot-on), human mother and conservative daughter Abby Huntsman (Cecily Strong), Joy Behar (McKinnon), Ana Navarro (Villaseor, also on point), and Princess of Arizona Meghan McCain (Aidy Bryant) debate Trumps immigration policy, devolving into a fight between militant liberal Baher and facile idiot McCain. They eventually welcome former co-host and leading anti-vaxxer Jennie McCarthy (Stone), who spouts anti-science nonsense to the bafflement of her peers save for McCain, who argues on her behalf out of bad faith. The sketch ends just as it starts to get going.

Hobby Enthusiasts is a music video in which Villasenor raps to an uninterested Stone about her hobbies, which include self-portraits, sewing, knitting, cooking for one and smelling my books! Eventually, Stone joins in to rap about her toy train obsession.

Ladies Room is another musical number, an 80s dance tune from a trio of glamorous, big-haired singers (Stone, Strong and Jones). Theyve confused a Limited Express fitting room for the ladies room at Club Vortex, much to the horror of the stores manager (a Jerry Curl-sporting Thompson) whose pronouncement of the word toilet is the funniest part of the bit.

The first K-Pop group to appear on SNL, BTS performs their hit Boy with Luv as screaming fans threatens to drown them out.

Weekend Update starts with a rundown of Assanges very public arrest. It was so satisfying seeing an internet troll getting dragged into the sunlight, says Colin Jost, who plays a clip of Donald Trump claiming he doesnt know anything WikiLeaks before rolling a montage of the presidents praise for it, pointing out that Trump is more obsessed with WikiLeaks than this audience is with BTS.

With Spring Break around the corner, Michael Che introduces Carrie Krum, the awkward pre-teen travel expert played by Bryant. She recommends vacationers head to Boise, Idaho, where she spent her most recent vacation, and her grammys cul-de-sac. The bubbly, easily excitable character seems to connect especially well with the BTS fans in the crowd.

Next they bring on Nico and Brie, the hashtag-obsessed Instagram couple played by Mikey Day and Heidi Gardner. There to give couples advice on picnicking in time for warm weather, they start bickering. Its a solid send-up of social media hucksters, but also insufferable by design, to be fair.

Royal Baby Shower has the ginger of Windsor, Prince Harry, recording the event for his child. He introduces friends and family, including a furiously jealous Kate Middleton, an obnoxious James Corden and The Queen herself, who welcomes her great-grandchild with all her heart, despite the fact the baby will be half-American, which makes you half-traitor. Theres no real payoff and none of the jokes earn more than a chuckle.

The final sketch is Chalmers Reserve, an infomercial for a line of rotgut sold by Trett and Leezan Chalmers, hosts of the reality show The Nastiest Summer Renters in Sag Harbor, which has been cancelled already. They introduce the winemakers, a stereotypical Italian couple who arent actually Italian, who warn viewers not to drink the wine. Despite an abrupt ending, the sketch is enjoyably weird.

Thanks to her natural comic timing, Stone continued her streak as a strong host. But the real stars of the episode were BTS.